With the Oil Crisis in America hitting the people and businesses hard, it was a turbulent time for the United States. Having faced financial loses, The Vendo Company chose to streamline and concentrate solely on its drinks vending machine distribution division. This was one the most lucrative and sturdy pockets of business held by The Vendo Company and they had much previous success in the sector. Even though the site held in Kansas was closed, the company still kept plants functioning in Fresno, California and Corinth, Mississippi [1] In 1982, Elmer F Pierson, the founder of The Vendo Company, died aged 85. Elmer was praised for having been “One of the first business executives to express that there should be an interconnection between the corporate world and the art world” [2]

The 1980’s brought together two incredibly influential and successful companies that had mutually reflective qualities and had similar histories, despite being on different continents, with no relationship, and no affiliations to this point. Both had innovative ideas and developed iconic models that changed development, designs and productions within their fields, both made pursuits in varied areas of business and both made significant impact on the war effort for their alliance. These unique characteristics created a sort of symmetry and connection between the two companies even before their merger in 1988. Potentially, their relationship was laden with barriers such as, language, culture and social differences to name a few; but maybe all barriers are there to be overcome or perhaps they were never there to begin with; wherever the reality lies, the outcome was that the Japanese Sanden Corporation (who had experience of their own vending products, already released on the market) acquired the Vendo Company. The company received technical and financial support from its new parent company [3] and many saw The Vendo Company revitalised by the input and nurture that Sanden Corporation bestowed upon it. It wasn’t long before The Vendo Company began introducing innovations to the automated goods distribution market again. Showing that the support had truly helped rejuvenate the company.

In 1996 the Sanden Company was awarded an EPA prize (contribution to ozone layer preservation) by the US Environment Protection Agency. [4] The welfare of the environment became a pioneering drive behind The Sanden Corporation and Mr. Kaihei Ushikubo is reputable for being, amongst other things, environmentally conscious. This is still a core value in the company today. In 1999, Mr. Kaihei Ushikubo died aged 94. The Vendo Company continued to expand and in the early 2000’s moved its headquarters to Dallas, Texas and not long after changed its name, as a mark of thanks, loyalty and respect to its parent company. SandenVendo was born.

Today SandenVendo is a global enterprise that needs no introduction. It has, as a company, been integral in pushing the markets technology boundaries and in 2004 revealed the first vending machine equipped with C02. The company has flourished. The factory in Italy has expanded and there are now offices in Japan, Spain, Germany, France and Belgium. Keeping up with the rapidly growing market, SandenVendo have also started a Coffee sector of the business and in 2015 developed a new coffee machine; the company continues to advance the vending industry into a new era.

It seems lamentable, on reflection that neither the founder of The Vendo Company, Mr. Elmer F. Pierson, or the founder of The Sanden Corporation, Mr. Kaihei Ushikubo, would live to see their companies names stand side-by-side, as they sleekly merged and blossomed into the universal giant it is today; arguably, dominating the worlds vending stage. The consistent correlation and commonality between these two corporations seems, looking through their history, to have transcended any obstacles, barriers and complications with ease and with equal, mutual respect. Perhaps this relationship expertly highlights the Sanden company creed, bestowed upon the company by the late Mr. Kaihei Ushikubo,

“Let us Develop with Wisdom and Prosper in Harmony.”

With all the honour and respect that comes with a mission statement such as this, it seems that this is exactly how it was for both The Sanden Corporation and SandenVendo, and how it continues to be today.

https://www.japantimes.co.jp “When industry works in step with nature” by C.W. Nicol

Elmer F. Pierson and the beginning of Vendo – Feature Article (1 of 3)

The story of SandenVendo begins on August 27th, 1896 when Elmer F. Pierson was born. Elmer, along with his brother, John, would go on to become the world renowned ‘Vendo Brothers’.

The Pierson brothers worked from an early age, delivering goods for the family grocery business. The boys’ father was the proprietor of several neighbourhood grocery stores. Here, Elmer grew increasingly curious of the world and envied the travelling salesmen, who visited the stores, as they had the opportunity to see the nation and seemed to make a good living [1]. Elmer was eager to explore for himself and took a job as a clerk for a wholesale grocery company, rather than going to college. Whilst this job enabled him to travel over a couple of states, these weren’t quite the glamourous and exciting sights that he had in mind! With strong desires and ambitions, he decided to head in a new direction.

With the outbreak of World War I, Elmer served his country as a second lieutenant in an Army machine gun unit and in 1919, after taking night classes, he graduated from Kansas City Law School and was admitted to the bar. Taking a bit of a different turn, as opportunity presented itself, he headed into property sales. He had a very unsuccessful first attempt but quickly picked himself up, with the help of his brother John, and made better headway on his subsequent ventures. No doubt he used his vast sales knowledge and experience to generate good profits that enabled him to finance the opening of his own firm.

Elmer had many strings to his bow (including being president of the Kansas City Real Estate Board) before he even embarked upon the journey into vending machines with his brother John in 1937, when ‘The Vendo Company’ was born.

Vending machines during the 1930’s were notoriously unreliable and the most effective way of getting a cold drink seemed to be digging your way into a chest freezer full of ice and finding it. They were also mainly outside making them seasonal in colder climates and hard for shopkeepers to manage their stock effectively as they relied heavily on customer honesty. The mechanical vending machines also seemed to falter when it came to distinguishing between real and counterfeit coins. The other popular shortcoming was machines jamming, particularly when trying to extract bottles from icy water.

Vending machines were perhaps seen as a bit of a risky, rather obscure challenge to be taking on in 1937, but after-all, isn’t that a sign of a great entrepreneur? Spotting the need and the potential in something before anyone else does. The Vendo brothers endeavoured to improve the state of vending machines, with focus on making the machines indoor, more reliable and tackling the problem of counterfeit coins.

The brothers purchased a patent for a lid that could be attached to coolers. With insightful innovation they designed a product that was more practical than anything else on the market. ‘The Red Top’ was born and is arguably the most iconic vending machine in history. The design had the vending lid moving the bottle towards the opening, rather than moving the opening to the bottle. It was essentially a lid with mechanical underpinnings that could be fitted onto a standard cooler. The design had the advantage of storing the bottles away from the ice, which lessened the potential for mechanical failure [2]. The innovative team that Elmer and John worked with were able to develop a shrewd ‘sound wave detection technology’, this sensor could determine whether coins put into the machines by patrons were real or counterfeit, based solely on the sound waves that were emitted when the coins dropped into the machine. Ingenious! Now that’s not to say that the machines all worked seamlessly from this point, there were redesigns and upgrades, just like we would strive for today; a modern refrigeration unit was added so ice was no longer an essential element, but by 1940 the reliability had caught the eye of Coca-Cola who officially endorsed them. 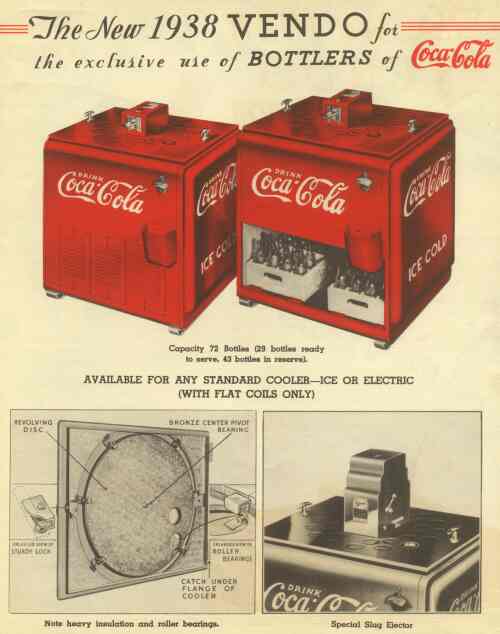 During World War II, The Vendo Brothers, landed a massive sales contract from the War Department, which considered soft drinks ‘essential for soldier morale’ [3]. This was not the only military contract won by the company; the sensor technology that had been developed for coins was utilised and the same principle was applied to test the quality control of artillery shells for the U.S military [4]. Elmer was very proactive in the war effort and also volunteered The Vendo Company resources to help develop a portable antenna, for use in conjunction with radar to detect German Submarines. After 3 months of development Vendo went into production of 300,000 antennas [5]. After the war The Vendo Company went on to experiment with other technology devices that also operated through sound waves. The main business remained vending machines and it continued to grow geographically. By the 1960s, Vendo was the largest vending machine company in the world and had merged with a competitor to add Pepsi-Cola and Royal Crown drinks to its machines and it even sustained its global lead when glass bottles were replaced by aluminium cans.

In the 1970’s the oil crisis rocked the nation and businesses everywhere, including Vendo were affected. Facing financial losses, the company sold off its assets and kept only their drinks vending machine distribution division. This was merely the beginning for The Vendo Company. The 1980’s were going to bring exciting new developments, from exciting areas of the world.

With prices as low as 17p per face mask per outer case of 2000 Type IIR disposable face...

Intelligent Vending is pleased to announce the introduction of a new table-top vending...