Blog - The beginning of Sanden – Feature Article (2 of 3)

The beginning of Sanden – Feature Article (2 of 3)

Mr. Kaihei Ushikubo started it all for Sanden. He was 34 and managing a textile mill when World War II broke out. At this time, private sector manufacturing plants were enforced to either shift into the sector of ammunition producing plants or close their business. [1] This is how the predecessor of The Sanden Corporation was created, in 1943, with 198,000 Yen, which in today’s terms is round about £1,400; it was named The Sankyo Electric Company. (The original site the company was built on, is where the present Head Office of Sanden is still currently located today!)  Mr. Ushikubo’s company showed great aptitude for flexibility and was able to adapt quickly to the changes happening in the world around it.  The company was very electronically minded, and technology driven and specialised in mica-condensers, wireless communication devices and paper-condensers, to name a few. These were developed using synthetic resin molding.

In 1948, after the war was over, Mr. Ushikubo set about developing dynamo lighting bicycle sets. Throughout the war, most of his task force had been riding to work on bicycles and they had been his inspiration for the product.  A sales campaign was run on dynamo bicycle lamps with a trademark “Owl” shining in the darkness, with slogans “Second sight in the night” and “A thousand times brighter than a full moon” [2] By 1953, it was producing 30,000 units a month, securely establishing itself as a permanent fixture in the dynamo bicycle lamp business sector [3]

JIS (Japanese Industrial Standards) were launched for the dynamo bicycle lamps in the early 1950’s. The low-voltage method designed by Sankyo Electric Company became fundamental criteria for the JIS; following this, in 1953, the company started exporting the dynamos. The company also began moving into the electric home-appliance market and the refrigeration market for business users. The staff at Sankyo were able to pioneer and develop a refrigeration product that was an open-type showcase which had never been seen in the industry. The design was a unique selling point putting the product into high demand, and the pioneering, innovative technology undoubtedly helped to revolutionise the sector. The company didn’t stop there, it was constantly developing new products for the sector, including mini-motors, electric washers, and other home electrical appliances. The company was growing fast and the main business offices were moved to Tokyo and shortly after Sankyo Electric started producing ice-cream freezers and more refined open refrigeration showcases.

As the company continued to grow with the start of the 1960’s, and with healthy sales of their electric freezers and refrigerators, the company branched off in a new direction and developed an original bubbler juice vending machine (also known as the ‘fountain juice machine’) and then went on to develop, down a slightly different avenue, oil heaters. The breadth of products available by Sankyo Electric seemed unbound and the technology seemed unrivalled. By 1964 the Sankyo Sales Company was established, spinning off the sales division from Sankyo Electric Company. [4] Not long after the oil heaters were on the market, the innovators at Sankyo Electric were able to manufacture a clean, forced-ventilation type heater that didn’t pollute the air in the room. This was an outstanding piece of technology that no-one had ever accomplished before. The company consistently acquired technologies, both in the cooling and heating areas of business. [5] 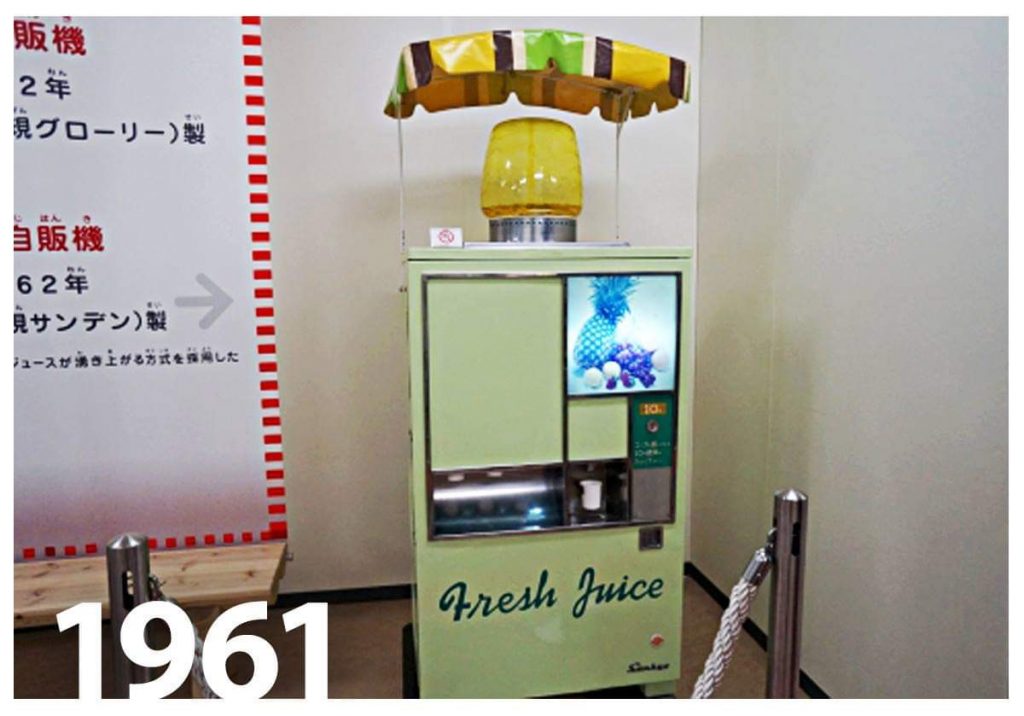 As the company was clearly a global leader on the refrigeration and ventilation front and were continuing to develop these technologies, in 1970, it caught the eye of the American, Mitchell Corporation. Sankyo Electric received an offer for technical collaboration for small-scale compressors. With this opportunity Sankyo Electric entered into an alliance with Mitchell Corporation and embraced its (still current) role as a manufacturer of compressors for air conditioning systems used in the automotive industry; the company continued to grow and establish itself in more countries and today parts it supplies are used in a quarter of all the cars produced world-wide. [6] In 1973 the “Sanden” tradename was established, and the company’s stocks were listed on the first page of the Tokyo Stock Exchange. [7] The company also launched affiliate branches around the globe in America, Singapore, Australia and the U.K.

The 1980’s brought with them a lot of progression for Sankyo Electric. 1981 saw the invention of a scroll-type compressor for automotive air-conditioning systems. Once again, this was a product that had never been seen before. One of the most noteworthy changes came in 1982 when the company changed its name to match its trademark; Sankyo Electric Company became Sanden Corporation and in 1984 the company expanded its global presence even more with joint ventures in India, Malaysia and Mexico. Sanden are clearly a very insightful, forward thinking and progressive company who don’t shy away from opportunity and in 1988 they came across a vending company in America. One who, like themselves had taken the world a bit by storm and who, like themselves, had pioneered and developed some spectacular products that arguably revolutionised their own market sectors. The company had been started by two brothers in Kansas and was called The Vendo Company.  The journey that followed changed and shaped the vending world forever.

The Currenza C2 coin changer needs little or no introduction to the vending industry.  A...

With prices as low as 17p per face mask per outer case of 2000 Type IIR disposable face...

Intelligent Vending is pleased to announce the introduction of a new table-top vending...